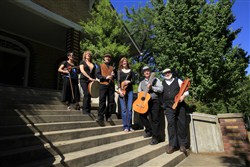 Calico Rock, AR – Returning to the Calico Rock Music Hall Saturday evening (September 25th) will be the popular group, Celtic Breeze.  Based in Mountain View, the group plays traditional Irish, Scottish, and Welsh tunes which form the roots of much of our modern folk, country, western, bluegrass, and gospel music.  Included in their repertoire are also some of the better known American folk tunes.  They have performed regularly at the Ozark Folk Center as well as at other venues throughout the area.

Robin Rains (lead vocals, Irish bodhran drum) lives with her husband and their children in Mountain View.  She has been with Celtic Breeze since its inception and her renditions of ancient Irish airs, some performed in the Gaelic tongue, are particularly moving.

Brooke Barksdale (fiddle, vocals) has been playing music and singing for many years – first with her family group The Barksdales, and subsequently with Clearwater and other groups.  She is also an accomplished solo balladeer.  Her album “Watching Trains Go By” was released last year.

Ron Ford (tin whistle, Irish flute, pipes) is the “real musician” of the group with a Degree in Performing Arts in orchestral woodwinds.  He is accomplished on the Irish flute and tin whistle and the combination of Brooke’s fiddle and Ron’s whistle is as Celtic a sound as you can get.

Charlie Mink (mountain dulcimer) has been playing for many years.  He began finger picking the dulcimer about four years ago in an attempt to reproduce the acoustic flavor of the Celtic harp.  Charlie enjoys learning and passing on the sometimes fascinating history of these ancient Celtic tunes.  Charlie’s CD “Mostly Celtic” was released two years ago.

Lenord Clark (vocalist, guitar) is a native of Minnesota. Lenord sang in Jr and SR High School and college choirs. A singing tour of Europe with his college choir included the countries of Scotland, Norway, Sweden, Denmark, Germany, Holland, and England. While in the Navy he performed with the celebrated U.S. Navy Blue Jackets Choir. Lenord and his wife, Valerie make their home in Mountain View.

Doors open for this Saturday’s show at 6:30 p.m., with the show starting at 7:00.  The Music Hall is located in the historic Methodist church building at the junction of state highways 5 and 56 in Calico Rock. Anyone wishing more information about the Celtic Breeze show, other upcoming performances, or are interested in performing on the Music Hall stage themselves may call 870-297-3010.